The City spent two years studying the program and working with the company, the legislature, and having public hearings about the program.  The State legislature passed the bill authorizing the city to enter into the program during its 2011 session.  After that, more public hearings were held, the program was discussed at numerous city council meetings, and the story was covered by the newspapers and television stations.  In November of 2011, the start of the program was announced.  Signs were posted at all entrances into the City letting people entering the City know that video enforcement of traffic laws were being used.  In December, a month long warning period began and ran until January 9, 2012.  During that time warning tickets were issued with no penalty.  Beginning January 9, 2012, tickets were issued with fines associated with them.  Cameras were and are still in place at the stop signs at the 23rd Avenue NE and 25th Ave NE intersection and at the intersection of Polly Reed Road and Reed Road.  Citations are given to vehicles that do not stop for the stop sign.

There is also a van (now a trailer) that is moved from place to place to monitor speeding.  Some of the places the camera is stationed are: Dogwood Lane, north of the courthouse annex, on both the northbound and southbound lanes, and 23rd Avenue NE at approximately 3rd Street.  Tickets are only issued to vehicles traveling at least 11 mph over the posted speed limit.

Several studies have been conducted to determine the number of accidents, speeders, traffic light and stop sign violations in the City.  The results have been astounding and contributed to the City's decision to implement this program.  Several years ago the State Highway Department sent us a study of accidents at intersections in Center Pont.  The results were specific to each intersection and indicated a significant problem.  Before the decision was made to implement the program, a twelve-hour study was done around the City to determine the need for the program.  The results in the area of Dogwood Lane showed over 3,000 vehicles were exceeding the speed limit by at least 11 mph and some were driving in excess of 80 mph in a 40 mph zone.  We had Center Point Fire District furnish us with the number of accidents they were called to on Center Point Parkway from January 2010 until February 2012.  They were called to 555 accidents.  This does not include accidents with no injuries that did not require their assistance.

The City's portion of the funds that are generated from the tickets is placed in a restricted funds account that, by State law, can only be used for law enforcement and traffic safety purposes.  It cannot be used as part of our general fund budget to operate the City. 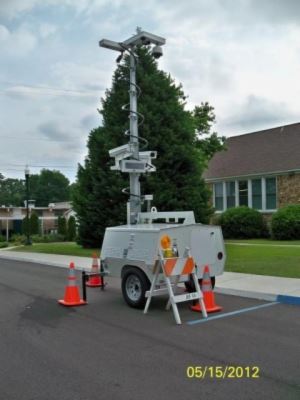 The new speed monitoring trailer will replace the van that has been previously used.  This trailer will be moved periodically to control speeding in troublesome locations.  Signs are already located at the entrances to the City warning of photo enforcement of traffic laws.  Additional signs warning of photo enforcement will be posted on or near the speed limit signs prior to the placement of the trailer.  Also, the camera will only be activated by vehicles going at least 11 mph over the speed limit. Please drive safely.